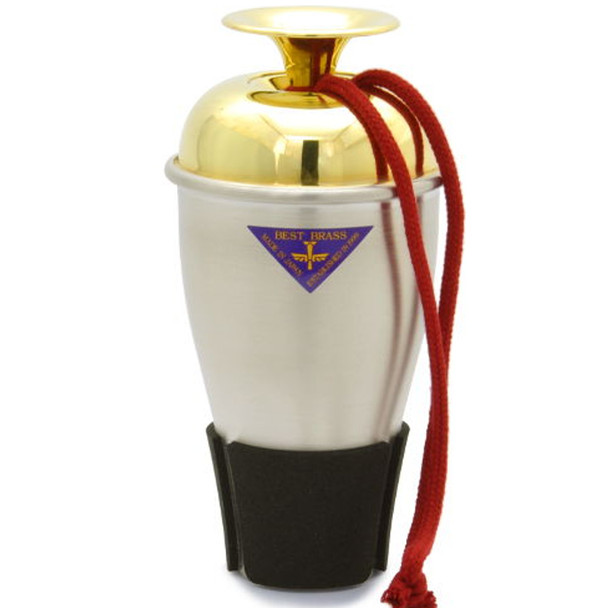 PotStop is a stop mute whose feature is truly one-of-a-kind. This mute allows you to play stopping with a regular fingering on a score and also can be used for F, Bb, F/Bb double horn, and now even for Vienna horns!
When first developed, the ‘Non-transposing’ stop mute back in 2003, the concept itself was actually for students. However, in reality, it was surprisingly accepted mostly by professionals and currently used in many major orchestras such as Vienna Philharmonic Orchestra.
Some features of the new model are based on and developed by taking in dialogues with the players who actually uses the past ‘Non-transposing’ mutes for years. The quality is further advanced and exceeds the past models at any points, and here, PotStop is newly-born as a truly professional stop mute.

MSRP:
Now: $88.95
Was:
When it comes to performance Tom Crown 30FH french horn mutes are a preferred choice of players and educators for intonation accuracy, projection and durability. Tom Crown Classic offers the 30FH...

MSRP:
Now: $135.00
Was:
The UPMUTE practice mute gives a feeling of freedom and total control of the whole register and the intonation, from the lowest pedal tones until the highest register. Following the UPSOUND...

MSRP:
Now: $265.00
Was:
This stopping mute is considered by many to be the 'Rolls Royce' of the mute world. Both for it's playing characteristics... and it's price. But remember, once you purchase a good mute - it will last...

MSRP:
Now: $26.50
Was:
This astoundingly small Warm-up is not just a midget. It is a practice/warm-up accessory. Let me introduce how to use. 1. Insert in any Wah-Wah mutes and practice/warm-up quietly.2. Place on any...

MSRP:
Now: $135.00
Was:
The UPMUTE practice mute gives a feeling of freedom and total control of the whole register and the intonation, from the lowest pedal tones until the highest register. Following the UPSOUND...

MSRP:
Now: $53.00 - $62.95
Was:
This amazing compact mute for trumpet is even quieter than popular Warm-up trumpet.Its quality as warm-up mute is same as Warm-up trumpet or even better actually.Some people prefer Warm-up, and some...

MSRP:
Now: $170.50
Was:
A fundamentally new approach to the design of the mute.'e-BrassIV Trumpet' was created by carrying out a thorough investigation of the idealacoustical design of something we call the total...

MSRP:
Now: $82.25 - $99.99
Was:
Best Brass’ straight has a dark and rich sound from its pianissimo in all registers, while it still is hard to accomplish that with traditional straight mutes. Especially, the difference in low...

MSRP:
Now: $175.00 - $189.99
Was:
The world’s highest performance practice mute.Superior quietness, and natural feeling with all range register. Based on the acoustically acoustic method of Best Brass mutes, e-Brass? reduces...

MSRP:
Now: $115.00 - $144.95
Was:
Many of top Jazz players are particular about the taste of their own Wah-Wah(harmon) sound. Imagine yourself playing a cool solo with your favorite Wah-Wah mute; it must look sharp, however, it...