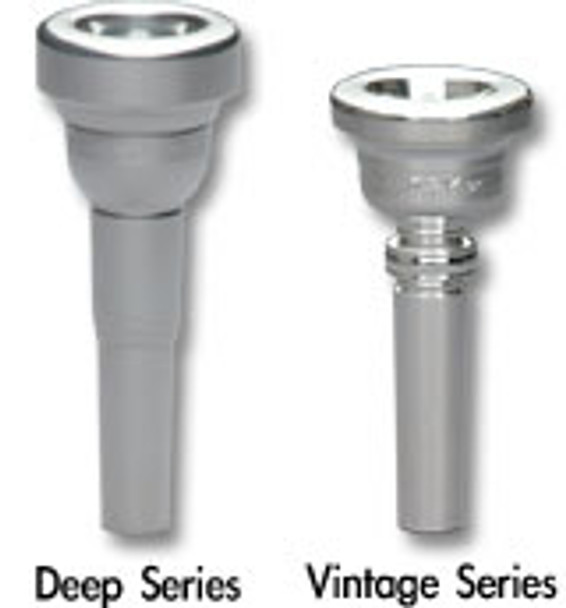 ‘P” Model Cornet (P) The popular DE cup in the Standard Curry Line is now available in a cornet shank. The P model is versatile! Use it on your piccolo trumpet or cornet with equally good results from Torelli to Dixieland. Deep Cornet Series (DC) Cornet mouthpieces are available for every rim size available. If you like a rich, traditional sound, try the Deep Cornet (DC). It's relaxed second cup and #25 (3.81mm) bore help you attain that mellow sound without any loss of focus. Great for the trumpeter who occasionally plays cornet. TC Cornet (TC) The trumpet/cornet TC cup is a stock item available in all Curry Standard line rims and 600 Series rims. A combined concave/convex cup with a .153" (3.89mm) bore can get the most out of your favorite cornet. Vintage Cornet Series (VC) The Vintage Cornet Series is based on cornet mouthpieces from the early 1900's and combines the classic look and sound of the old cornet mouthpieces in a blank that will accept the more comfortable rims of today. The blank has been slightly altered from the original so that the original “cookie-cutter” rim is not a problem. Play all day on this mouthpiece with the breathy, intimate sound that only these classic mouthpieces had! Cup design is a deep V cup, short 2nd cup and large throat (#18, 4.31mm). The softer undercut of the originals was also preserved. This promotes a slightly softer attack and greater comfort. Vintage Cornet Series mouthpieces are also available on special order in the larger shank required by some older (mid-1950's Olds) cornets as well as the Conn Short Cornet. NEW For 2011 Brass Band Cornet Series (BBC) brass band cornet The deepest cornet cup of the Curry line is now available in all Curry Standard Line rim diameters. A deep concave funnel-type cup with a relaxed 2nd cup and .160" (4.07mm) bore gives this cup the breadth of sound to play in most brass band settings. While not as deep as some other manufacturers' models, this cup was designed for both great sound and maximum playability.
View AllClose

MSRP:
Now: $64.95
Was:
Engineered like no other mouthpiece, the Curry Standard Line incorporates the same rim and bitepoint on the shallowest to the deepest cup within each diameter. This feature gives you the freedom to...

MSRP:
Now: $65.00
Was:
Bach mouthpieces have been designed in an orderly progression from the largest to the smallest diameters, and from the deepest to the most shallow cup, all with a choice of rim designs. Rim shape is...

MSRP:
Now: $42.50
Was:
Computer-aided design system and computer controlled lathe work together to produce the most precise, consistent mouthpieces in the world

MSRP:
Now: $64.95
Was:
Looking for a cup that’s tight and bright, and a rim that won’t tire you out? The 600 Series is for you! Designed for today’s high energy music, these designs help you produce maximum sound with...

MSRP:
Now: $99.00
Was:
The Artisan line of mouthpieces reflects the earliest offerings of Vincent Bach in look, tone, response, and most importantly sound. The cornet mouthpiece's shape and contours are based on Vincent...

MSRP:
Now: $57.25
Was:
Denis Wick has revolutionized the cornet playing world with his careful attention to sound and design. As a result of his work, Wick cornet mouthpieces create a rich, creamy tone unmatched by any...

MSRP:
Now: $69.50
Was:
Cornet mouthpieces Silver-plated. Schilke Silver Cornet Mouthpiece Series When choosing a Schilke mouthpiece the first number is the cup diameter, the first letter that follows is the cup volume, the...

MSRP:
Now: $42.50
Was:
Computer-aided design system and computer controlled lathe work together to produce the most precise, consistent mouthpieces in the world

MSRP:
Now: $72.99
Was:
All Vacchiano cornet models use the same rim as the trumpet and the standard cup depths B, C, D or E are available with either a standard or short cornet shank. We recommend the standard cups to...