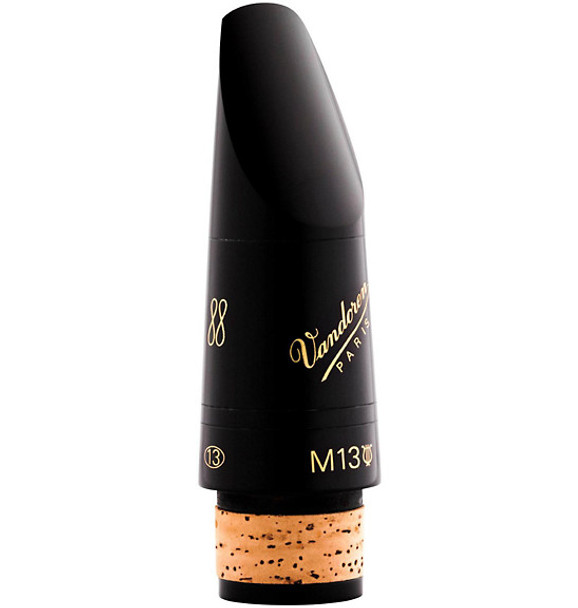 Vandoren has developed the “13 series” mouthpiece specifically for American clarinetists using A440 pitch.

Four models have been originally developed with specific facings to this series: the M13, M13 Lyre, M15 and M30 mouthpieces.
The “13 series” range also encompasses other models (traditional facings): 5RV, 5RV Lyre, B45, B40, B40 Lyre and M30 Lyre.

MSRP:
Now: $42.50 - $84.95
Was:
The new ligature M/O combines the lightweight construction of the legendary Masters ligature with the highly efficient tightening of the OPTIMUM ligature. • Lightweight • Easy to set...

MSRP:
Now: $96.50 - $106.95
Was:
The difference between ”Profile 88” and Traditional mouthpieces is in the exterior angle of the beak. Therefore, the musician is free to choose the model which suits his purpose in terms of best...

MSRP:
Now: $106.95
Was:
The clarinetists historical reference 5RV : Easy blowing, very rich timbre. B44 : The time-proven standard for musicians. B40 : With the same technical specifications as the B44, its wider tip rail...

MSRP:
Now: $180.50
Was:
The clarinetists historical reference. B44 : Validated by musicians, indisputably the best. B45 : Same sound qualities as the B44 with a larger tip opening. Very responsive. B40 : With the same...

MSRP:
Now: $96.50 - $106.95
Was:
The difference between ”Profile 88” and Traditional mouthpieces is in the exterior angle of the beak. Therefore, the musician is free to choose the model which suits his purpose in terms of best...

MSRP:
Now: $28.99
Was:
Reserve Evolution features the thickest blank of the Reserve clarinet line. It offers roundness of sound, a heavy spine for increased projection, a thicker tip for enhanced articulation, and greater...

MSRP:
Now: $104.99
Was:
Inspired by the most prized, vintage mouthpieces of the 1920s, Reserve harnesses modern technology, pioneered by D’Addario, to recreate the incomparable mouthpiece craftsmanship of yesteryear...

MSRP: $145.00
Now: $127.00
Was:
Complex simplicity “It has long been my goal to create a clarinet mouthpiece that satisfies the nuances of change while preserving the history of the craft.” – Richard Hawkins Outstanding artist...

MSRP:
Now: $84.95
Was:
Vandoren' s Optimum Ligature features one adjustment screw that is threaded through both posts of the ligature ensuring even pressure on the reed. As a result, you will find more of your reeds will...

MSRP:
Now: $281.75
Was:
The favorite of classical saxophonists. The conception of this series was the fruit of research on both external shape (particularly the beak) and sound, in order to meet the needs of today’s saxo-...