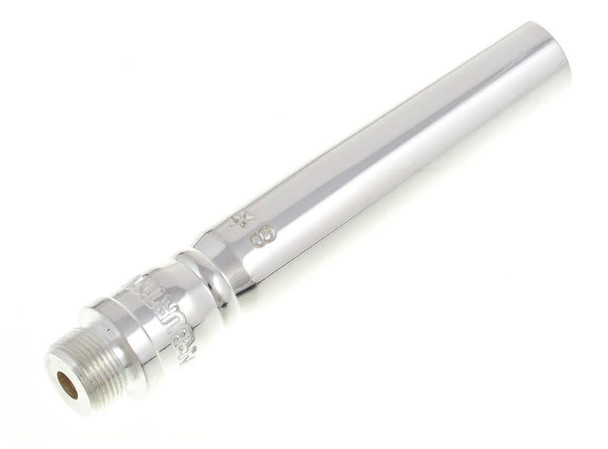 The STANDARD Series - Our standard series models have long established themselves as the most popular choice for nearly any playing situation.

The STAR Series - These were designed to allow each of the STANDARD models to be more free blowing without the necessity of reaming to a larger bore size. This is important because the quality of sound remains the same without the risk of losing focus sometimes caused by playing of too large bore size. Since these models were made available, the medium large sizes (7* to 10*) have been very well received in the orchestral trumpet community.

The "B" Series - They are exactly like the STANDARD and STAR series internally. The only difference is in the external dimension which is slightly larger and causes a subsequent increase in the GAP. This added diameter can re-establish a functional gap distance in trumpets with worn receivers and where the mouthpiece receiver has been soldered to the lead pipe improperly.

While we recommend the use of our STANDARD series for most situations, if there is a noticeable problem with "LOCKING-IN" of the upper partials, the "B" backbore will very often rectify the problem.

MSRP:
Now: $79.95
Was:
Backbore: #0Very free blowing backbore that allows the orchestral player to use massive quantities of air without losing focus.  Commonly paired with either a #24, or #25 throat...

MSRP:
Now: $101.25
Was:
The Warburton system facilitates the brass player's choosing of a rim diameter, cup style and depth, with a backbore to best balance his/her sound and resistance. This choice ultimately affords one...

MSRP:
Now: $79.95
Was:
Backbore: #0Very free blowing backbore that allows the orchestral player to use massive quantities of air without losing focus.  Commonly paired with either a #24, or #25 throat. Applications -...

MSRP:
Now: $65.00 - $100.00
Was:
The Speak-Easy is a small inline weight that goes up to the top of your backbore on your Warburton mouthpiece*. It is extremely simple to use: it just slides on or off and it’s held on by a simple...

MSRP:
Now: $64.95
Was:
Engineered like no other mouthpiece, the Curry Standard Line incorporates the same rim and bitepoint on the shallowest to the deepest cup within each diameter. This feature gives you the freedom to...

MSRP:
Now: $89.95
Was:
All trumpet tops come with 27 throats anything else will be special order only.

MSRP:
Now: $65.00
Was:
Bach Standard Series mouthpieces are some of the most popular mouthpieces in the world among both students and professionals. Vincent Bach was a rare combination of artist and engineer. A mechanical...

MSRP:
Now: $84.00 - $85.00
Was:
Using our most popular custom configurations, the Symphonic Series were designed with the classical player in mind. Each mouthpiece is crafted using original Bach designs and crafted to exacting...

MSRP:
Now: $185.00
Was:
Any Options that are not in stock will need to be special order only. Please email sales@dillonmusic.com to place your order.