Dillon Music was incorporated in 1992 and has quickly become one of the foremost leaders in the music industry, but the history of the company dates back a great deal further than 1992, and includes much history in the United States.

The first musician in the Dillon Family can be documented back to the 1700s. William Dillon served in the Continental Army, with the 2nd VA Regiment from 1776 until 1779. William was a fifer in the Revolutionary War. William spent the winter at Valley Forge with General Washington and he was present at the Battle of the Brandywine, Stony Point and The Battle of Monmouth. Fifers, as well as drummers, were important figures and used as signalers in the Army. The Army was awakened to Reveille, called into formation by the playing of The Troop, and called to provisions by the playing of Roast Beef, etc. The fife and drum were the clock and the signals for the entire Army. When the Army marched, the drums and fifes played to keep step and when the Army was camped, the fifer would entertain the troops to keep up morale.

Quince Dillon, Great Grandson of William, was a fifer in both the Mexican War and American Civil War. Quince also was an accomplished fiddler. Quince's unit, the 166th Virginia Militia, was eventually incorporated into the 59th Virginia Infantry, which along with other Confederate units, was captured at the Battle of Roanoke Island, North Carolina on February 8, 1862. As the story goes, the Yankee commander of the prison where Dillon was imprisoned held a fiddle contest. The prize was that the fiddler who played the best original composition would be set free. Quince Dillon played a song he composed on the spot and won the contest!

Elbert Ebb Dillon, Great-Great-Great Grandson of William, along with his brother John and Uncle Quince, helped to influence the Fiddling of Henry Reed, the renowned country fiddler. 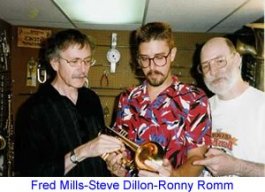 Mr. Dillon has been dealing in musical instruments since he was in the 7th grade. During that time he developed a deep knowledge of antique and vintage instruments, so much so that most of the manufacturers in this country refer questions about history and value of their respective instruments to Mr. Dillon. At one time, Steve Dillon had a personal collection of over 250 vintage/antique trombones. He has also supplied instruments to many Civil War Recreation Bands in this country.

During his high school and college years, Mr. Dillon supplemented his income by purchasing instruments from Pawn Shops/Flea Markets and selling them to classmates.

In 1986, Steve graduated from Rutgers University with a degree in Music Education. During his time at Rutgers, he spent 2 years in an independent study at the Institute of Jazz Studies, under Dan Morganstern.

In 1987, Mr. Dillon started sending lists of vintage antique instruments to collectors around the world, selling various antique brass instruments and woodwinds. By the time 1988 rolled around, Steve was established as a world wide dealer in musical antiques. Some of the instruments Mr. Dillon owned found their way into major collections and museums, such as the Utley Collection in the Shrine to Music Museum. Mr. Dillon has also done extensive appraisals for collections, including the Utley. He has also become the foremost expert on the trombone virtuoso, Arthur Pryor, of whose trombone Mr. Dillon owns.

1988 was also the year Steve married his wife, Lynn, who is co-owner and the person that keeps Mr. Dillon out of jail. (Mrs. Dillon makes sure all the taxes are paid, and assures he wears matching clothing). During the Dillons early marriage, they used their home as a warehouse. Tubas were in every corner, saxophones stacked in the guest bathroom tub, packing peanuts in the attic. In short, the house was filled, top to bottom, with musical instruments. Sunday was packing day and orders were shipped out on Monday. 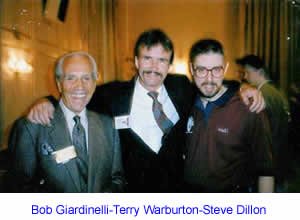 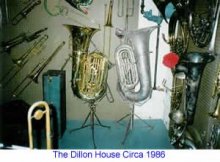 In late 1991 the Dillons decided it was time to move into a store and incorporate, thus the current location in Woodbridge, NJ. A lease was signed in late 1991, and Dillon Music Inc. opened for business in March 1992.

Why Woodbridge? Woodbridge is 4 hours from Washington D.C., 4 hours from Boston, 1 hour from Philadelphia and 45 minutes from Manhattan. In addition we have Newark Liberty International Airport 15 minutes away, and the train stops just 1 block from the store. Also, every major road in the State of New Jersey intersects in Woodbridge.

In 2002, Steve Dillon purchased the mouthpiece business of Jerome Callet, thus adding a custom mouthpiece maker to the extensive repair/custom shop that was already in existence.

In 2003, Steve wanted to go back to his family roots, so he purchased a fife and joined the 2nd VA Regiment in honor of his ancestor, William Dillon. After a year of practicing, experimenting and researching fifes Steve has decided to manufacture his own, which are now available on this web page. 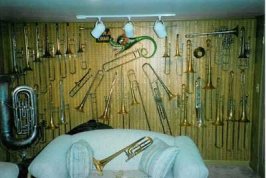 In 2004 Mr. Dillon was honored by the State of Kentucky with an honorary Colonelship for his work with music in that state. He has also spoken at the Great American Brass Band Festival on numerous occasions.

Dillon Music has the most knowledgeable staff of any establishment on the earth. The inventory is extensive in both instruments and accessories.

Whether you're a professional or an amateur, you'll find a home at Dillon Music!

For orders above $39.00 except tubas and tuba cases

We ship to over 90 countries

was added to your shopping cart